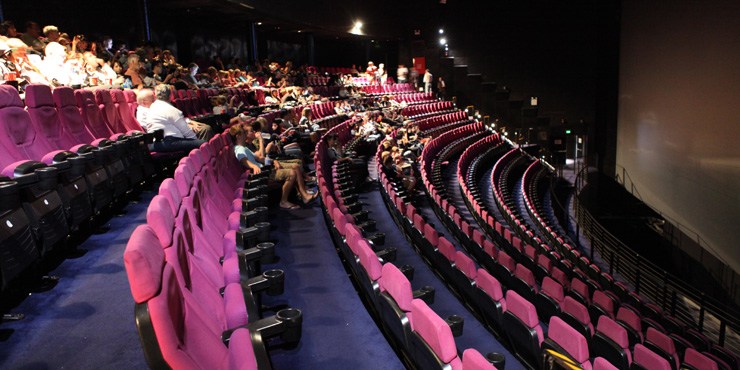 It is going to the theatre to forget you’re at the movies. Sitting there, without the slightest doubt, convinced you’re someplace else. Going, in the space of minutes, to a place that’s frightening, intense, heart-rending, altogether magical – a place you’ve never been before.

IMAX grabs your senses. Visually, there is no frame. The picture’s bigger, higher, wider than your field of view. You’re no longer at the window peeking out; you’re outside among the stars. And that sensation is intensified by the sound. It’s all around you and it’s real – so much so that the whole experience is visceral. You don’t just hear and see an IMAX movie. You feel it in your bones.

There’s a complex web of high technology and architecture that makes an IMAX movie real – and it’s largely stuff that IMAX invented. We had to, because we are committed to pushing the boundaries and doing things no one in cinema has ever done before.

The highest-resolution cameras in the world. Projection lights so bright you can see them from the moon. A sound system so precise you can hear a pin drop from across the room and know exactly where it fell. And every IMAX theatre is customized with our patented screen and seating design to ensure you’re always in the center of the action – no matter where you’re sitting.

IMAX is so special that the most ambitious and accomplished filmmakers vie for the chance to make an IMAX picture: Christopher Nolan and Brad Bird; James Cameron and J. J. Abrams. In fact today, for every IMAX movie that we make, we turn down five or six.

And there’s a world of collaboration, too, that’s unique to IMAX:  hours, weeks and months spent on location and in the editing room with the director and technical teams of each film– planning the shots, re-mixing the sound, endlessly adjusting the saturation, contrast, brightness and hundreds of details in virtually every frame in an enhancement process we developed called [Digital Re-mastering, or DMR]

It’s all fascinating in its own right, but once the lights go out it doesn’t matter anymore. IMAX isn’t about the hardware. It’s not about production.

Out with the old screen and in with the new!

The world's biggest IMAX screen has (temporarily) come down in preparation for the new screen installation. At about 8.30am this morning, a team of riggers climbed to the top of the auditorium and set the screen free from the scaffolding holding it up from behind.

The History of IMAX

It all began when a small group of Canadian experimental filmmakers came together to produce a multi-screen film installation at EXPO ‘67 in Montreal. The installation was part of a competition to create the first truly large-screen film experience. The filmmakers did it by syncing nine projectors together. It was a huge technological challenge... And they pulled it off!